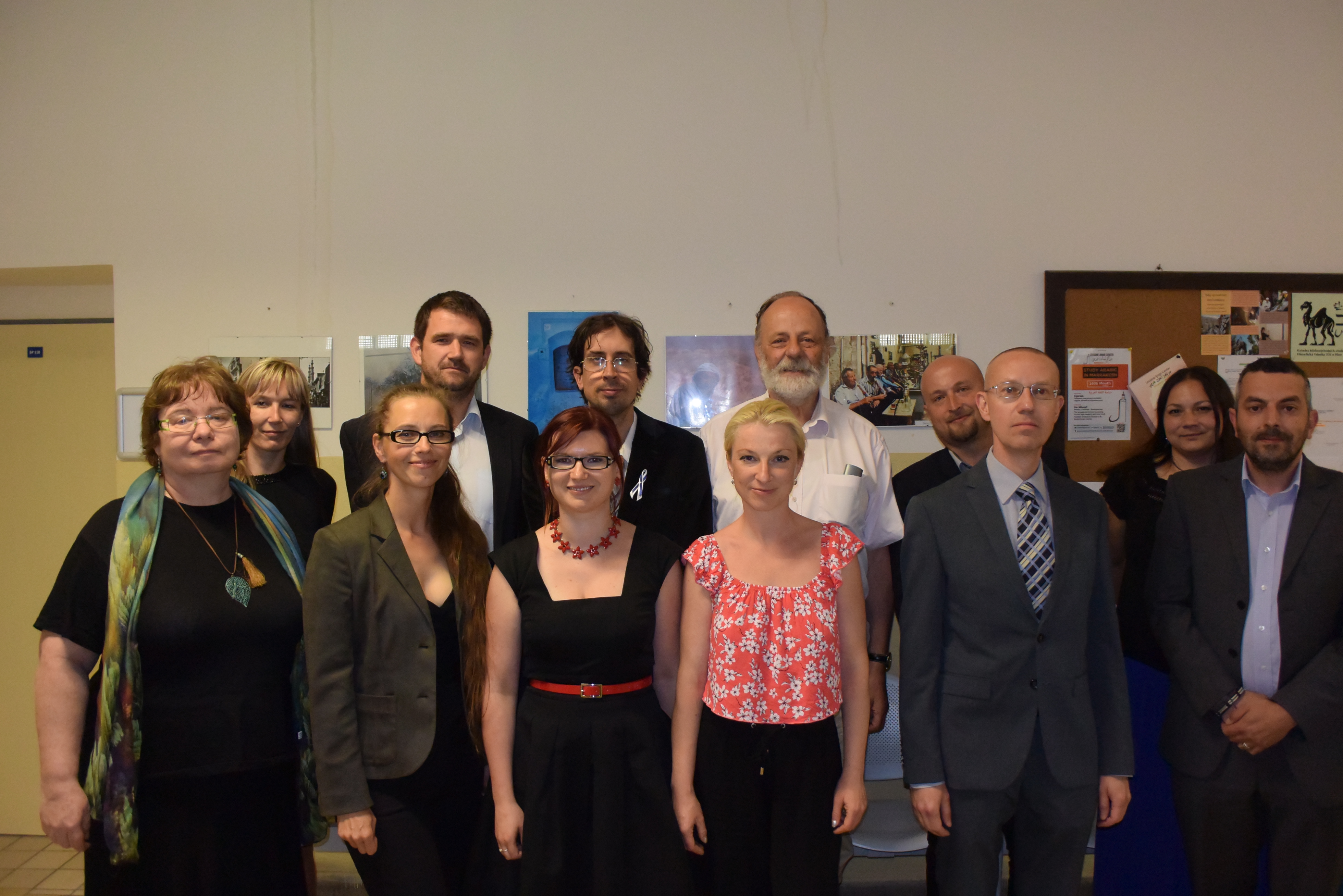 Petr Charvát, born at Prague, Czechoslovakia, in 1949. Studied Archaeology and History (1967-1968) and Archaeology and Assyriology (1969-1973) at the Philosophical Faculty of Charles University, Prague. Diploma thesis in Assyriology, received his PhDr. title (= M.A.) in 1975. He worked at the Archaeological Institute of the Czechoslovak Academy of Sciences in Prague in 1975-1990. Defended his CSc. (= Ph. D.) thesis in Medieval Archaeology in 1978 and was awarded the title in 1980. Participated in archaeological excavations both home and abroad: Egypt (1974, the mastaba of Ptahshepses at Abusir, a tomb of the 24th century B.C.), Sri Lanka (1982-1984, Abhayagiri Vihara at Anuradhapura, a monastic site of the first millennim A.D.) and Iraq (1989, Jemdet Nasr, a site of terminal 4th millenium B.C.).

He worked at the Oriental Institute of the Academy of Sciences of the Czech Republic at Prague in 1990-2005. Received his habilitation (Docent = Associate Professor) in Slavic (= Historical) Archaeology at the Masaryk University at Brno in 1995, and his DrSc. title (= D. Litt.) also in 1995. Associate Professor at the Department of Near Eastern Studies, Philosophical Faculty, University of West Bohemia at Pilsen since 2006.

He has been working at Berlin (1992, proto-cuneiform texts), Paris (short-term tours in 1995-2001, finds from Susa, SW Iran), excavated with the Czech archaeological mission at Beirut (1996) and worked at excavations in Turkey (1997 and 1999, as member of the Spanish Archaeological Mission to Turkey). He received a John William Fulbright grant in 2003-2004, studied Near Eastern archaeological materials at the University Museum of Archaeology and Anthropology, University of Pennsylvania, Philadelphia, U. S. A.

Professor of Charles University, Prague, since 2011.

In 2011-2012, he worked on a project entitled History from bits of clay: The Sumerian early state of Ur at the beginning of third millennium B. C., at the Internationales Kolleg MORPHOMATA, Universität zu Köln, Germany.

Daniel Křížek graduated at the University of West Bohemia in Pilsen in the Middle Eastern studies. He earned his Ph.D. in Ethnology at the same university for research on contemporary Sufism in Western society. He focuses on issues related to contemporary Islam, history of Muslim countries with the emphasis on post-Arab Spring development and anthropology of Islam. He systematically develops his research activities in cooperation with academic partners in Morocco and Iran. Recently, he co-edited a volume dealing with Arab Spring (Beyond the Arab Spring in North Africa, co-edited with Jan Záhořík, Lexington Books, 2017).

Ivan Ramadan born in Prague, is an Arabic language Specialist and a Modern Middle East historian at the Department of the Middle Eastern Studies at the University of West Bohemia as well as at Fachakademie für Übersetzen und Dolmetschen in Weiden, Germany. As a Social and Cultural Anthropologist he was focused on multicultural policies towards the Roma community of the Czech Republic. As a Linguist and an Anthropologist of the Middle East he concentrates on  the Arabic grammar and proverbs as well as on the modern history of Syria and Egypt from the political, economical and social viewpoint.  In his recent articles he aims for describing the latest development tendencies and processes accompanying the so called Arab Spring, which has started in the Middle Eastern Area since 2010. In his dissertation thesis he also dealt with the Medieval Arabic/Islamic Science, particularly with the Interpretation of the Arabic/Islamic Medieval Medicine in the western and Arabic/Islamic historiography of science. He has published several articles and monographs such as Multicultural Policies of the Czech Republic towards the Roma Community (2005), Arabic Popular Proverbs Nowadays and in the Past (2011), In the secrets of Arabic Grammar (2014), Syria within the book Arab spring II. part –Syria and the Arab Peninsula (Křížek ; Tarant 2014), or Medieval Arabic/Islamic Medicine: History of Interpretation (2015). He had also lectures at foreign universities, for instance at the Al-Mustafa International University in Qom, Iran, or at the Universität Bayreuth, Germany. He is also active as a Court Interpretor (Arabic/Czech language), especially in connection with the Middle Eastern refugees, as his latest participation on the Czech/Bavarian Migration Project (MINT) relates to the Migration and Social Integration issues.

Kateřina Šašková (1979) is an Assyriologist/historian (Th.D. in Religious studies at Protestant Theological Faculty, Charles University in Prague). Her principal fields of research are history and culture of ancient Mesopotamia, especially Assyria in the Neo-Assyrian Period. She published the monograph Duchovní svět staré Asýrie a jeho paralely a odlišnosti ve Starém zákoně (2014). She also co-edited volumes Shepherds of the Black-headed People: The Royal Office vis-à-vis godhead in ancient Mesopotamia (co-edited with Lukáš Pecha and Petr Charvát, 2010) and Stopy (v) šafránu (co-edited with Petra Písařová, 2012). In cooperation with Assyriologists from various countries of the world, she participated in the creation of the Old Babylonian Text Corpus (http://sp105p02-kbs.ff.zcu.cz/nobtc/app/webroot/pages/index), an electronic corpus of Old Babylonian texts published on the Internet and containing a sophisticated search tool. In recent years, she worked on the Cuneiform Sign List (http://home.zcu.cz/~ksaskova/), a website available for a wider audience. In addition to the list of cuneiform signs itself, it also contains references to the important Assyriological sources and its own Neo-Assyrian cuneiform font created by the author. At the present time, she works as an assistant professor at the Department of Near Eastern Studies of the Faculty of Philosophy and Arts at the University of West Bohemia in Pilsen.

Zbyněk Tarant was born in 1982 in the former Czechoslovakia (today’s Czech Republic). After graduating at the University of West Bohemia in the field of Cultural Anthropology of the Near East, he continued his studies at the same institution, where he got his Ph.D. in 2012. The topic of his dissertation, named “The Diaspora of Memory” was the history of Holocaust memory and its institutions in the State of Israel and the USA.

Since 2006, already as a BA student, he became actively involved in the research of contemporary antisemitism. His specialty is monitoring of cyber-hate and analysis of emerging threats in the contemporary Central European antisemitism. His reports on antisemitism are currently being used by the Czech Federation of Jewish Communities, as well as foreign institutions, such as the Kantor Center for the Study of Contemporary Antisemitism at the University of Tel Aviv, but are also made available to the public by means of public lectures.

Zbyněk Tarant presented his research conclusions on dozens of international conferences or by means of invited lectures, including United States, United Kingdom, Germany, Greece, Italy, Switzerland, Morocco and others. He visits Israel regularly for the purpose of research and speaks Modern Hebrew, which he also teaches at the Department. In 2015, he received a research scholarship at the IDC Herzliya in Israel under the Czech-Israeli program Masaryk Distinguished Chair. Dr. Tarant has participated in the ISGAP’s Summer Institute for Curriculum Development in Critical Antisemitism Studies at the Hertford College in Oxford in 2015 and the Summer Institute for Israel Studies at the University of Brandeis in 2014. He is an author and co-editor of several monographs in Czech and English, including: Diaspora paměti – židovská paměť a reflexe holocaustu v Izraeli a Spojených státech (The Diaspora of Memory – Jewish Memory and Reflection of the Holocaust in Israel and the United States).

His contemporary research scope includes the history of Israel, its political culture and relations with the former Czechoslovakia as well as mechanisms by which the Middle-Eastern crises resonate in the Czech society with special focus on the role of internet and new media in these phenomena. He currently cooperates on several projects, including: Migration and Integration in the Czech-Bavarian Border Region (in joint team with Universität Bayeruth, led by Daniel Křížek) and Visual Antisemitism (at the Instute for Art History, Czech Academy of Sciences). Along with the projects, research and teaching, Zbyněk Tarant is currently working on a book about the Czechoslovak-Zionist relations during the difficult years of 1938-1939.

QR code – scan to upload a business card into your phone:

Věra Tydlitátová (1959) is a historian of religion, her specialization is Judaism. She graduated in the field of Religious studies at the Faculty of Philosophy and Arts (Mgr.) and at the Faculty of Theology at the Charles University in Prague (Th.D.). In her research, she focuses on the Jewish studies, State of Israel and on the modern Antisemitism. She has edited and co-edited many almanacs and published a lot of articles and studies on the biblical phenomenology and on contemporary Antisemitism, especially its occurrence in the Czech Republic. The topic of her last great monograph is the presence and the transformations of Antisemitism in the Kremlin propaganda in the Czech environment. She is also the author of several monographs on these topics, especially on the incidence of Antisemitism in the electronic media and in the political propaganda. She is lecturing at the Department of Middle Eastern Studies Faculty of Philosophy and Arts at the University of West Bohemia in Pilsen since 2001.

Jan Záhořík (1979) is an Africanist/historian (Ph.D. in African history and cultures, Charles University, Prague). In his research, he is focused on modern and contemporary history and politics of Ethiopia, Czechoslovak-African relations, conflicts in Africa, Islam in Africa, as well as history of European colonialism in Africa (primarily Equatorial Africa and the Horn of Africa). He has published numerous articles, monographs, and recently co-edited volumes dealing with Arab Spring (Beyond the Arab Spring in North Africa, co-edited with Daniel Křížek, Lexington Books, 2017), politics in the Horn of Africa (The Horn of Africa since the 1960s. Local and International Politics Intertwined, co-edited with Aleksi Ylönen, Routledge, 2017), as well as colonialism in selected regions of Africa (Colonialism on the Margins of Africa, co-edited with Linda Piknerová, Routledge, 2018). His monograph on Inequalities and Conflicts in Modern and Contemporary African History is now in print (Lexington Books, forthcoming). He is a member of the Association for the Study of the Middle East and Africa, where he was awarded Best Conference Paper Prize in 2013. Jan Záhořík serves as a member of advisory boards of various academic journals in Europe and Africa. Currently, he serves as a vice-dean for external relations at the Faculty of Arts, University of West Bohemia in Pilsen. He has been lecturing at many universities in Europe, Africa, and North America. He has played an instrumental role in developing relations with academic institutions across Europe and Africa (Pavia, Falun, Bologna, Addis Ababa, Khartoum, etc.).